Why debates are essential to both political insiders and undecided voters 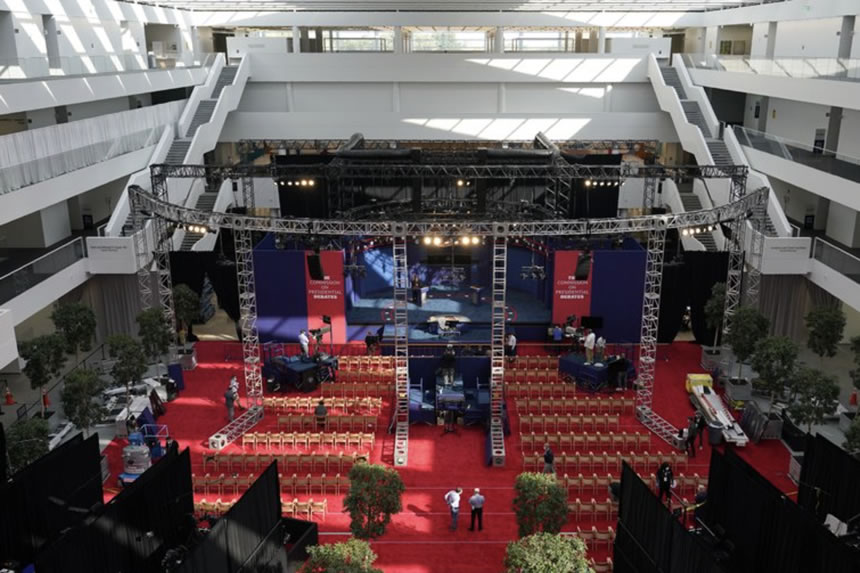 The 90-minute presidential debates, as a whole, are expected to be one of the most-watched programs for the entirety of autumn, with 2020 projections on track to rival the ratings of the Super Bowl.

Just an hour before the presidential debate, Utah’s gubernatorial candidates Chris Peterson and Spencer Cox also took to the stage in their own showdown, streamed live by the Utah Debate Commission.

“Both are equally important,” said Karen Hale, co-chair of the Utah Debate Commission, of the two debates. “We’ve noticed in previous debates where we’ve had a presidential debate go back-to-back with one of our statewide debates, we’ve really had great viewership. I think people recognize that each office is critically important to the well-being of our state and to our country.”

The format of the presidential debates offers an easy catching-up point for voters who are just wading into the thick of the election: six 15-minute segments, each focused on a big-ticket policy. The topics for the first debate included a smorgasbord of flashpoints from the Supreme Court, election integrity and COVID-19, to the economy, social justice and Trump and Biden’s records.

For citizens more focused on the big picture rather than the day-to-day ruckus of politics, debates provide a general sense of how each candidate taps into the current climate. For those with distaste for both candidates, they can weigh their detailed platforms and begin to make choices.

“There are a couple of outcomes that are good for candidates, and this is what they’ll be trying to do,” Jason Perry, director of the Hinckley Institute of Politics, said of the debates, “These candidates are trying to solidify their base. It’s one thing for their base to say they’re supportive and this is who their candidate is, but they really need those voters to actually cast a ballot.”

He said that such motivation can be essential for campaigns in other ways, as well: “Motivating voters can be a big part of a debate; it makes them feel better about the candidate, more firmly convinces them to a particular candidate. What flows from that, oftentimes, is not just a vote but also money. People donate to campaigns significantly after a successful debate. So if a candidate does very well, not only do they motivate people to show up, they’ll convert a few, but they’ll also get money to flow.”

Hale said the debates can also be an effective tool to engage voters leading up to the election.

“Civil debate and voter awareness are essential to our electoral process, and so the candidate debate is the most effective message for engaging the voters,” Hale said. “The electorate is really well served when candidate performance can be evaluated and compared as opposed to when candidates are put on the spot to respond to questions.”

The debates, however, do not provide thorough fact-checking in real time, so while the spectacle provides a good jumping off point, voters may also want to look to local and national media recaps, and nonpartisan fact-checkers such as FactCheck or PolitiFact for evaluations.

“It’s a snapshot, is what a debate is,” Perry said. “You get to see the candidates at this moment, for this hour instead of over time. … It’s the cumulative effect, it’s the constant interactions or the reinforcement of the message that we’re just not able to get from our candidates as clearly this time.”

As the first presidential debate, Tuesday’s proceedings also provided a tone-setting first impression of how candidates speak in real-time, with sometime messy results. In contrast to social media and news clips, which are often edited down into quick soundbites, and conventions intended to rally the base, the presidential debates offer everyday Americans and swing voters their first extended look at their options. In a cycle where both nominees have faced criticisms of their mental acuity, this introduction might end up being especially impactful moving forward.

“If there’s a major gaffe, a major misstatement of a policy or something like that, it can really have a negative impact,” Perry said. “It can be something that is used time and time again, not just by your opponent, but by supporters of your opponent as well, to try to reinforce that negative whatever it was.

Civil debate and voter awareness are essential to our electoral process, and so the candidate debate is the most effective message for engaging the voters.

Despite the risks, however, debates also present opportunities for significant advantages, Perry said. “We can look historically at debates, and there are those moments where a star just rises, the right kinds of policy are stated, the right kinds of comebacks come and they win people over. That is a big advantage of a debate.”

On the gubernatorial level, the debate is similarly important because it offered Democratic nominee Chris Peterson one of his largest platforms to combat sitting Lt. Gov. Spencer Cox. Appealing to moderate Republicans in the deeply red Beehive State was a must for Peterson’s election chances; and on the flip side, Cox had a significant opportunity to solidify and expand the strong party support that propelled him to victory in the primaries.

“At a more local level, it’s even more important this time because candidates are not able to interface with voters in any kind of traditional way,” Perry said of the gubernatorial debate. “In the old days, pre-COVID, candidates could go out and they’d meet with people, they’d have town halls, they’d go door to door. People had a chance to really get to know those candidates if they wanted to. And because we don’t have any of that possibility now, things are done virtually, I think that will have an outsized impact this election cycle from these debates, but truly at the local level.”

For more politically-enthusiastic viewers who already know the policy views of the candidates, the debate is a culmination of big-stakes narratives that’s ripe for watershed moments.

On the presidential level, Biden’s coronavirus-cautious campaign placed the debate as his reintroduction to the American people, while President Trump faced the controversy of his leaked tax returns. Even simple expectations — such as how heated the two became — was the subject of speculation for months beforehand.

– Jason Perry, Director of the Hinckley Institute of Politics

Debates shape media coverage and set policy agendas, temper and raise expectations, and present a risk and opportunity for both candidates involved.

On a gubernatorial level, sparks also flew at the debates over simmering issues, such as Peterson’s ongoing calls for a statewide mask mandate and Cox’s focus on local control to combat the COVID-19 pandemic.

“We have a lot of them in Utah, in particular, the people that are unaffiliated, they don’t necessarily subscribe to one party, they go for the candidate rather than just the party,” Perry stated. “There’s a lot of voters in Utah that are moveable, that you’ll be able to get if you do a successful job.”

“We are really lucky to have great partners on our debate commission, including higher ed institutions throughout the state. They help spread the word, and there’s a really big effort to reach out to people. This year especially, we’ve had a great opportunity to get people involved in the debate.”