Inside the newsroom: What it took to bring the vice presidential debate to Salt Lake City 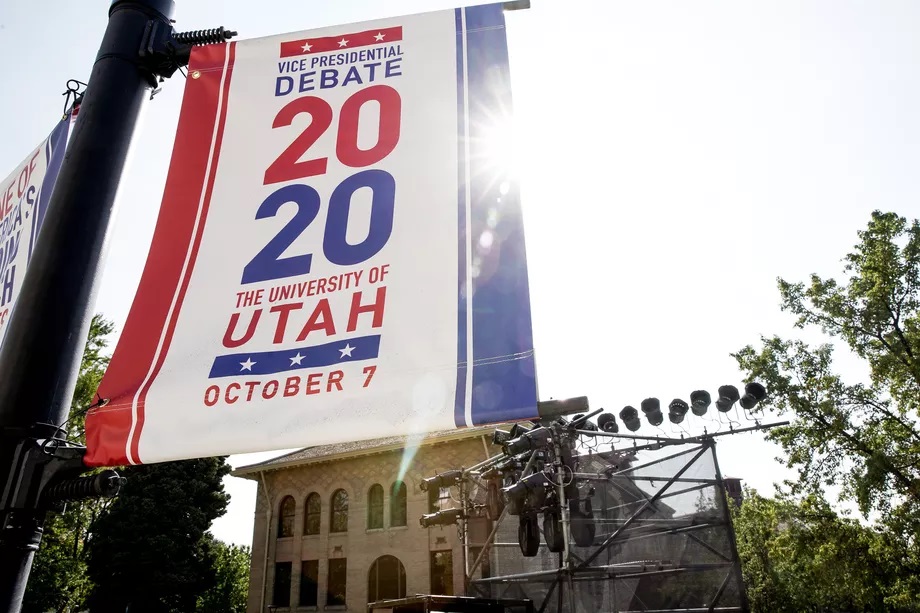 SALT LAKE CITY — Vice presidential hopeful Kamala Harris stood at the base of the This Is the Place Monument in Salt Lake City Saturday and reflected on the heritage of the state. With the 190th Semiannual General Conference of The Church of Jesus Christ of Latter-day Saints being broadcast around the world from just down the hill, she invoked the language of the Saints as she discussed the future.

“Part of the spirit was shoulder to the wheel, which is really about everything that I think we’re talking about right now in America,” she said.

Escorting her on the tour of historic sites was longtime Utah legislator Scott Howell, who has dedicated countless hours to the Utah Debate Commission and on this day could see the fruits of an effort years in the making.

Harris and Vice President Mike Pence will meet (coronavirus permitting) on the debate stage Wednesday at the University of Utah, a stone’s throw from the monument recognizing those pioneers from 1847, kicked out of the country, arriving to begin a new life in the West.

“I thought how far we have come from the time when the nation virtually expelled a large group of people solely because of their religious beliefs — a time when women could not vote and slavery was practiced — to a time when a Black woman has a very good chance of becoming the vice president of the United States,” Howell, a Biden-Harris supporter, said of the events that produced Saturday’s tour.

“I was humbled and grateful that I had the opportunity to represent the state of Utah, my faith, and leave politics behind and focus on what the future can be for all citizens,” he said

In the fall of 2014 some members of the nascent Utah Debate Commission gathered for a reception.

The first-year experiment of bringing competing media members together with academics, a few politicians and business leaders to push for holding statewide debates was off to a great start, and the reception marked the successful completion of five preelection debates.

As the conversation flowed, David Magleby, a longtime BYU professor of political science, posed a question.

“Dave said, ‘Have you thought about trying to get a presidential debate?’” fellow BYU professor Richard Davis recalled this week. “I remember saying, ‘That’s a good idea. We should do that,’” Davis said.

The idea was born in simplicity and it immediately found a willing audience with Magleby, Davis, Howell, Thomas Wright, the former chairman of the Utah Republican Party and members of the media engaging.

“We did a recap of debate season in November and we were feeling really good,” said Nena Slighting, who was hired to be the executive director of the Utah Debate Commission earlier that year. Few states had done what Utah was doing — bringing competing newspapers (the Deseret News and the Salt Lake Tribune), all the local TV stations, representatives from public TV and radio, and all the state’s universities around the same table to improve Utah’s civic culture.

The goal was to build a better-informed electorate and motivate more people to vote. The Utah Debate Commission brings organization and structure to debates each election cycle.

“We were talking about the appetite for political and civic engagement,“ Slighting said of those early years, and the question posed then by Magleby prompted the desire to go big.

Months later, early in 2015, Paul Edwards, my predecessor as editor of the Deseret News, and Slighting made arrangements to meet with Janet Brown, the executive director of the Commission on Presidential Debates, in Washington, D.C. The debate schedule for 2016 was quite nearly finalized, as some states spend years making their case to bring one of the four debates to town.

”There was about an hour of discussion,” Edwards said, “and part of it was a discussion about the Utah Debate Commission and what was happening in Utah with the innovation of the debate commission. She was very impressed with this.” Utah was one of only three states with such a commission.

Slighting and Edwards returned home, and members of the debate commission started making calls. Within weeks, meetings were held with both the president of BYU and the president of the University of Utah. A strong case was made for BYU as a venue, particularly with its broadcast studio capabilities next to the Marriott Center. But with Anheuser-Busch as a national debate sponsor and hospitality tents fueled with alcohol, among other things, attention turned to other venues.

The University of Utah is a strong venue with excellent infrastructure, including surrounding Salt Lake City hotel space and the close proximity of the Salt Lake City International Airport. The ability to host major events with unlimited volunteer power — as was evidenced at the 2002 Olympic Games — also came into play and the university emerged as the chosen venue.

A video presentation was sent to Brown making a good impact. Also deemed impressive was the state’s ability to marshal so many resources within weeks. Nevertheless, the time needed to make a solid entry and win a consideration was too compressed, and the decision ultimately made by local organizers was to push for a 2020 debate.

Hosting a debate costs millions of dollars. During the 2019 legislative session, the Utah Legislature approved $2.5 million to cover some of the costs. Private funds were also raised, helping to offset security costs, costs to meet the needs of a large media contingency, and other fees as well as the cost of hosting the many guests originally expected to attend.

Utah had the capability, the infrastructure and the desire. “So we submitted a bid March 1, 2019, and we worked closely with Visit Salt Lake and the University of Utah,” Slighting said.

“Hosting a vice presidential debate is a once-in-a-lifetime opportunity for Utahns to experience firsthand the importance of engaging in the electoral process,” she added.

The vice presidential debate was announced in Salt Lake City on Oct. 11, 2019. A University of Utah steering committee was then put in place to work with the Commission on Presidential Debates.

COVID-19 and the virus first came into public awareness at the end of December with stories out of China. As winter turned to spring, the world changed and the focus of the debates also changed. Now organizers are holding their breath in hope that the event will yet come to pass on Wednesday.

President Donald Trump is in the hospital being treated for symptoms of COVID-19. The nation hopes for his quick recovery. Trump’s illness puts into sharper focus the importance of getting to know the two candidates vying to become, as Pence is, second in line for the presidency.

“You know what’s about to take on heightened importance? The vice presidential debate next Wednesday. America doesn’t really know Sen. Kamala Harris, the Democratic nominee. It doesn’t really know Vice President Mike Pence, either. It’s a freakish year: The president is sick, and Mr. Biden, who turns 78 next month, would be the oldest president ever. Voters are going to want to know Ms. Harris and Mr. Pence a lot better. They’re going to look at that debate in a whole new way.”

There will be several dozen students in the hall. Last week about 4,000 students entered a drawing for tickets. The drawing cut the number to 300. A final drawing will be held allowing some number under 100 students to get both a ticket to the debate and a COVID-19 test to make sure they’re able to go. It’s the reality of the 2020 election.

The state electorate gets a look at both Republicans and Democrats and increased media coverage about the two candidates. And it all will happen from a stage in Utah because a group dedicated to helping Utahns become better citizens made sure that this was the place.

Correction: An earlier version said no students would be able to attend the debate.