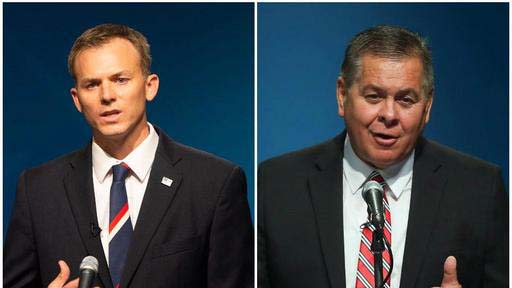 Democratic candidate Darren Parry of Providence says that he “one hundred percent” supports defense spending in nearby Hill Air Force Base.

Our president took $54 million from Hill last year to build his border wall,” Parry noted during a recent candidate forum sponsored by the Utah Debate Commission. “That is not acceptable. As your congressman, I will fight every day to make sure that the funding for Hill AFB stays where it belongs.”

But Parry is much less supportive of defense spending outside his own political backyard.

“I think we spend too much on defense,” he admitted, referring to the Pentagon budget of $716 billion in 2019.

While acknowledging the potential for cost savings in the defense budget, GOP candidate Blake Moore of Salt Lake City is equally protective of Hill AFB.

There’s good reason for the bi-partisan support of the military installation south of Ogden within Utah political circles.

Hill AFB is Utah’s sixth-largest employer. More than 10,000 service members and their dependents are assigned to the base. Many of them reside in the nearby communities of Layton, Clearfield, Riverdale, Roy and Sunset, all of which are within Utah’s 1st Congressional District.

The base’s tenant organizations include the Ogden Air Logistics Complex, which employs more than 16,000 civilian workers. In 2019, Hill Air Force base pumped an estimated $3.7 billion into Utah’s economy, including an annual payroll of nearly $1.5 billion and more than $800 million in local expenditures.

One of the base’s numerous missions is maintaining the U.S. arsenal of 450 Minuteman III intercontinental ballistic missiles that are now based in silos throughout the western United States.

Parry noted that Hill AFB will also play an instrumental role in replacing those missiles under the new Ground Based Strategic Deterrent program. That modernization effort is expected to take more than a decade at a cost of up to $85 billion.

The thinking of the rival candidates for the 1st District seat in Congress is naturally influenced by their backgrounds. Moore is a business consultant with previous experience in the defense and intelligence communities. Parry is a former tribal leader for the Northwestern Band of the Shoshone Nation.

While applauding the contribution of American service members to the defense of our nation, Parry still confesses that he thinks the U.S. spends too much on the military.

“We need to ask what are our priorities today?” he argued. “Is it to be the strongest nation in terms of defense?

“My grandmother, a tribal elder, taught me the most important lesson I’ve ever heard. It was that our Native American community is only as strong as its most vulnerable members. Think about that. Think about spending less on defense and devoting more money to people who really need it, the marginalized members of our communities.”

We have much bigger spending issues

“We have much bigger spending issues,” he said.

“We have to look at this from an international perspective. Unfortunately, China is not slowing enhancement of its military … That means that America needs to continue to be at the cutting edge in terms of military power.”

But Moore admitted that his time spent in government service has taught him that the U.S. could maintain its military superiority and still trim billions from the federal budget.

“There’s so much waste,” he explained. “You could look at a certain percentage of our federal budget, across the board, and think how much of this spending is wasteful? That’s what we should target and I know we can. Cutting that waste wouldn’t touch a job or a mission, all of our military objectives would still be there.

“But, if we can find savings, it’s not about just transferring that money somewhere else. We have to use those savings to take a step toward a balanced budget.”

Moore and Parry will compete in the upcoming general election in November.