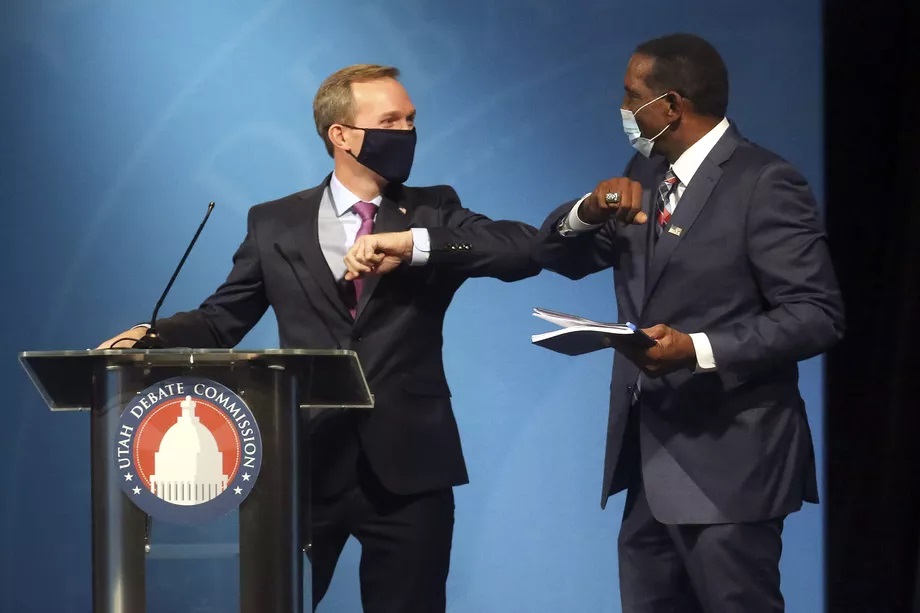 SALT LAKE CITY — In their only debate before the November election, Democratic Rep. Ben McAdams and Republican Burgess Owens sparred over some of Owens’ more controversial statements during the campaign, as well as issues including health care and whether there is systemic racism in the United States.

Owens, a former NFL player, author and frequent Fox News guest, said McAdams was using “D.C. tactics” and “fear” when the freshman congressman said that until recently, Owens‘ website called for a repeal of the Affordable Care Act known as Obamacare that includes protections for pre-existing conditions.

“Pre-existing conditions are off the table,” Owens said, an apparent reference to promises made by President Donald Trump and Republicans in Congress to keep the popular provision of the health care law in their replacement plan that has yet to be made public. “It’s not an issue.”

But in the most heated exchange during the Utah Debate Commission’s hour-long debate moderated by Deseret News Editor Doug Wilks, McAdams disagreed. “Simply saying that you want to protect people with preexisting conditions is not going to protect them. We have to keep the protections in place right now.”

Owens said as a cancer survivor, he understands the protections are needed and insisted it is “untrue” he ever supported doing away with them, although he acknowledged “tweaking” his website from calling for the repeal of Obamacare to reforming the decade-old law.

“It is true,” McAdams said, because repealing the law would do away with the protections. “I think justifiably so, people are afraid. They’re worried that they might lose life-sustaining access to medication. I think this is real and this is an important issue for us to debate. How are we going to protect people with preexisting conditions?”

The two candidates for the 4th Congressional District that includes portions of Salt Lake and Utah counties had differing views on the Black Lives Matter movement protesting police brutality against Black Americans, as well as about racism.

“Black Live Matter, BLM Inc., in their manifesto, are against capitalism, against the nuclear family and they are against God,” said Owens. who started the debate by describing growing up Black in the segregated South. He urged, “Good people, please don’t let a special interest drive the process. Know who they are. Do your homework.”

He said that “the idea that we’re a systemic racist county is totally false. I grew up during the days of the KKK, when you had separate bathrooms, separate fountains” and played in an NFL that did not have Black quarterbacks, but white people shouldn’t feel “they have to apologize for being white” and Black people shouldn’t be angry.

McAdams said while there’s been “incredible progress” made against racism, “we also have more we can do.” He said the events over the summer have highlighted that “there are people in our community who feel left behind and who feel they aren’t treated fairly.”

Asked about institutional racism, McAdams said, “let’s acknowledge there are some bad apples.” Referring to what he called the murder of George Floyd, a Black man whose death in police custody in Minnesota sparked this year’s movement, he said, “there are people who take despicable actions” and should be held accountable.

McAdams, who won the seat by less that 700 voters in 2018 from two-term Republican Rep. Mia Love, repeatedly described himself as an independent and bipartisan member of Congress. He said for some voters, he’s not liberal enough, while for others he’s not conservative enough, so “you know my heart is in the right place.”

Owens, who is making his first bid for elected office and has been endorsed by Trump, took several shots throughout the debate at Democrats, including that there should not be coronavirus relief funding to “bail out” so-called blue cities and states led by Democrats.

He faced questions about describing Democratic Party leadership as drawing “narcissists and sociopaths” that “love misery” in a Fox News interview last month, as well as his appearances on programs associated with the baseless far-right QAnon claims that a child sex ring involving powerful people is embedded in the deep state.

Owens said he stands by the statement about Democrats, and warned “there’s an ideology out there. We have to face the facts. The reality is our Judeo-Christian values has given us the great country we are. There’s another side of that picture that hates every part of that. And they use misery as a political tool.”

McAdams said Owens’ “words are troubling, in a time when America finds ourselves as divided as I’ve ever seen us. I think a lot of people are like me. We are exhausted of the controversy and the division and we want to come together.” Given the hardships of the coronavirus pandemic, it’s time “to stop the name calling,” he said.

Owens said any suggestion he is embracing QAnon because of his appearances is “as silly as it comes.” He said he still doesn’t “know what QAnon means or what they’re all about. It doesn’t matter because it doesn’t reflect on anything I’m doing right now.”

But McAdams took issue with that answer, noting the FBI has called the conspiracy dangerous.

“At what point are you responsible for the decisions you make? I think what we’re seeing here is a pattern of bad judgement,” the congressman said, bringing up that Owens has also appeared on a fundraiser for an effort led by one of Trump’s former top advisors, Steve Bannon, who faces federal fraud charges over how the money was used.

Chris Karpowitz, co-director of BYU’s Center for the Study of Elections and Democracy, said while McAdams portrayed himself repeatedly as a moderate willing to reach across the aisle, Owens “emphasized more traditional Republican talking points.”

That rhetoric, Karpowitz said, “will play well with committed partisans who are an important part of this Republican-leaning district, but it is less clear how effective it will be with swing votes who often make up the winning margin. McAdams was directly targeting those moderate and swing voters.”