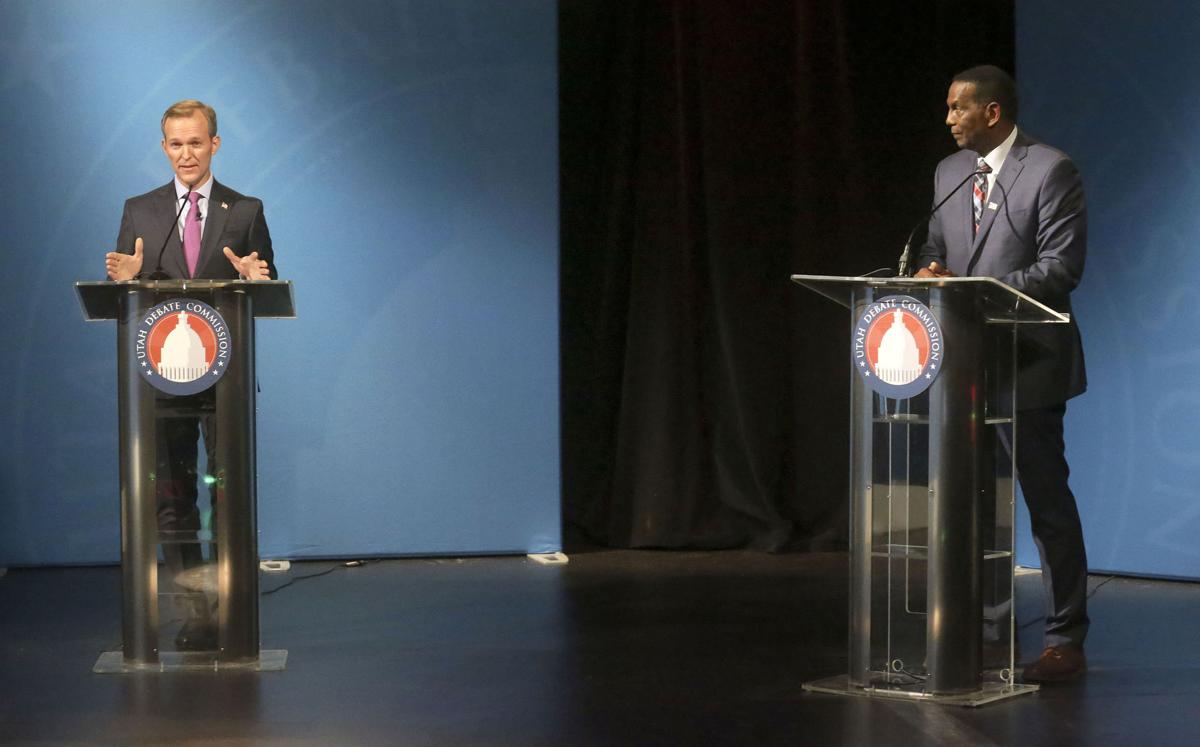 Republican 4th Congressional District candidate Burgess Owens on Monday criticized his opponent’s voting record while U.S. Rep. Ben McAdams, D-UT, called out Owens for what he said was “a pattern of bad judgment.”

The two congressional candidates exchanged jabs Monday during a debate at the Triad Center in Salt Lake City hosted by the Utah Debate Commission that covered subjects ranging from healthcare to racism.

McAdams, Utah’s only Democrat in Congress, criticized his Republican challenger for appearing on multiple internet programs tied to the far-right conspiracy QAnon, which the FBI has identified as a potential domestic terrorism threat.

“I still don’t know what QAnon means and what they’re all about,” Owens said when asked about his appearances on the programs. “It doesn’t matter, because it doesn’t really reflect on anything I’m doing right now.”

McAdams pointed out that Owens appeared on a QAnon-linked program as recently as Sept. 23, after he had already been criticized for appearing on such a program.

“At what point are you responsible for the decisions you make?” said McAdams. “I think what we’re seeing here is a pattern of bad judgment.”

Owens, a former NFL player and founder of the nonprofit Second Chance 4 Youth, criticized McAdams for voting in line with Democratic Congressional leadership 85% of the time, as well as for not doing enough to address child trafficking.

“It’s nice to talk about, but when it comes down to it, action really is what we’re looking for,” Owens said. “And this has been a passion for me for forever.”

McAdams shot back that he had introduced legislation on the topic, including a November resolution to protect minors from inappropriate content on digital apps.

“This is something that I have been working on,” he said.

On the subject of healthcare, the two candidates argued about Owens’ position on repealing the Affordable Care Act, which would remove coverage for individuals with pre-existing conditions.

McAdams alleged that Owens had previously stated on his campaign website that he supported removing coverage for pre-existing conditions but later updated his position.

“If I’d seen that on my website I’d be concerned too,” Owens responded. “It never said that, my friends.”

An internet archive snapchat from Aug. 31 shows that the campaign website stated that “Obamacare must be fully repealed so we can take a new approach to the issue.” As of Tuesday, the website states that “Obamacare no longer needs to be repealed, but changes are necessary in the current healthcare plan.”

There is no specific mention of pre-existing conditions on either versions of the web page.

When asked about Black Lives Matter and calls for police reform following the death of George Floyd in Minneapolis, Minnesota, Owens, who is Black and grew up in the segregated South, accused the group of being “against capitalism, against the nuclear family and … against God.”

“The idea that we’re a systemic racist country is totally false,” he said. “I grew up during the days of KKK (and) when you had separate bathrooms, separate fountains.”

McAdams said he acknowledged that “there are some bad apples” in law enforcement and said the officers involved in Floyd’s death “need to be held accountable and held responsible for their actions.”

When asked about whether he supported a statewide mandate, McAdams said he wears a mask in public and does his “best to model good behavior and then also to do my part to slow the virus.”

“And I think that’s what’s important for everybody in Utah,” McAdams said. “Let’s each and every one of us do our part, take responsibility for our actions, and do our part to help slow the spread of this virus and protect those who might be vulnerable.”

Following Monday’s debate, the Owens campaign said the Republican “is a fighter, someone whose story and experiences reflect our great state.”

“The choice was clear tonight, Burgess Owens in the genuine voice that would represent Utah values in Washington D.C.,” Michael Clement, Owens’ campaign manager, said in a written statement.

“A lot was discussed during last night’s debate — and a clear difference between me and my opponent is protecting Utahns’ healthcare,” McAdams wrote on Twitter.

Jonia Broderick, the United Utah Party candidate in the 4th Congressional District race, announced in a press release Tuesday that she would endorse McAdams on Wednesday.