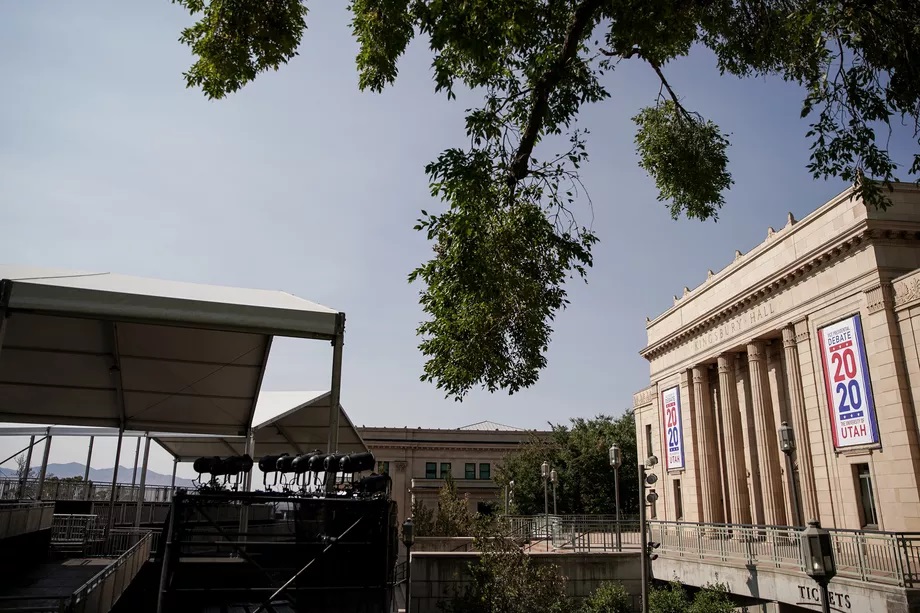 SALT LAKE CITY — The University of Utah will hold Wednesday’s vice presidential debate as scheduled, even though President Donald Trump is being hospitalized for COVID-19, the campus official overseeing the event told the Deseret News.

“We are working closely with the Commission on Presidential Debates and with our health professionals to ensure the VP debate is safe for all participants,” Perry said. “We are still moving forward.”

Vice President Mike Pence and the Democratic nominee, Sen. Kamala Harris of California — both of whom have tested negative for the deadly virus — will participate in a 90-minute debate at Kingsbury Hall that begins at 7 p.m. Wednesday.

Later Friday, White House physician Jesse Schonau said in a memo released by the vice president’s office that Pence “is not considered a close contact with any individuals who have tested positive for COVID, including President Donald J. Trump. Vice President Mike Pence does not need to quarantine.”

Schonau said the vice president “remains in good health and is free to go about his normal activities.”

Both Pence and Harris had been looking at coming to Utah several days in advance of the debate.

But it is no longer clear whether the vice president is planning on holding campaign events in Utah, including a rally and fundraiser, or meeting with local officials. Harris, however, is still expected this weekend but is likely to focus only on debate preparation, including acclimating to the altitude.

The Democratic presidential ticket, led by former Vice President Joe Biden, who also tested negative for the virus, was counting on the vice presidential debate happening as planned.

“Since Vice President Pence has tested negative at this point in time, we are moving forward on the VP debate on Wednesday, Oct. 7,” said Scott Howell, a former Democratic leader of the Utah Senate and a top surrogate for Biden in the state.

Howell, who is also on the board of the Utah Debate Commission that is partnering with the U. on the vice presidential debate, said “safety is the No. 1 concern for the candidates and all of those associated with the event. Protecting the health of all those involved will be our determining factor as we move forward.”

Howell said the “Bidens and the traveling staff have been regularly tested and committed to making a positive test public.”

He said the Biden campaign is “taking extra precautions” after Tuesday’s presidential debate in Cleveland.

NBC News is reporting that although the last known public contact Pence had with Trump was at an outdoor Rose Garden event on Monday, the vice president said at a campaign event in Pennsylvania Tuesday he had spoken with the president in the Oval Office earlier that day.

Pence’s debate advance team toured the University of Utah on Thursday, before news broke that Hope Hicks, a close adviser to Trump, had tested positive Wednesday after experiencing symptoms. News of the president’s positive test came early Friday in Washington.

The U. moved students to online classes through the end of next week and the number of guests in the hall as well as journalists, volunteers and others associated with the debate is being strictly limited. Everyone credentialed to be in the area secured for the debate will have to pass a COVID-19 test, wear a mask and take other precautions.

Chris Karpowitz, co-director of BYU’s Center for the Study of Elections and Democracy, said the vice presidential debate has become key to the November election since the remaining two presidential debates later this month could be canceled due to Trump’s health.

“The debate will be the biggest campaign event since the positive test, and it may be the last debate of this election season, depending on the president’s recovery.”

“On one hand, this massively increases the importance of the debate given the health and age of the two presidential candidates. The debate would show continuity of government and provide reassurances to many,” Kall said.

But, he added, “it may not be wise to subject Pence and Harris to additional risks given the health uncertainty of President Trump.”